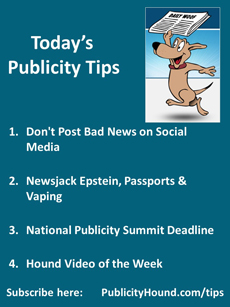 What do to with all those tomatoes? Make The Publicity Hound’s Tomato Pie, one of my favorite recipes. To cut down on the calories, I’ll try it with a cauliflower crust and low-fat cheese. But what about all that mayo? Google tells me to use whole milk Greek yogurt for baking, not the nonfat kind I usually buy. Important: Squeeze as much juice from the tomatoes as possible or the pie will be runny. I prefer to peel the tomatoes. 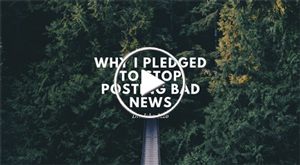 “Trump is a white supremacist.” “Biden is senile.” “Greenland is melting.” “An aborted baby was found in trash dumpster.”

Dr. John Izzo, a bestselling author and corporate advisor who speaks on the world of work and is an advocate for sustainable living, is depressed by all the bad news, too. He finds the comments on those posts equally disturbing. The mob piles on, bitches, but seldom suggests solutions.

“So I made a simple pledge,” Dr. Izzo said. “I would no longer post the latest bad news. Instead, I would only post stories about people stepping up to try to something about the big problems we face.”

He refers to studies done in hotels trying to convince people to reuse their towels to save energy.

“Turns out the best way to get people to do that is to post a sign in the bathroom that says something like ‘80% of the people who stay in the hotel choose to re-use their towels.’ The average increase in compliance was 20%! It went up another 10% when you changed it to ‘80% of the people who stayed in THIS room.’ In other words, all the signs about the world going to hell in a handbasket didn’t motivate people, but saying other people were stepping up motivated them.”

I love this. He’s not telling you to bury your head in the sand. But instead of complaining about a problem like the filthy tent cities in Los Angeles and San Francisco, share a story that suggests ways to deal with the mental health issues and drug and alcohol problems among much of the tent city population.

To do: Watch the video above. The next time you’re tempted to post a bad news item that offers no solution, remind yourself that you aren’t just boring your followers. You’re depressing them. Thanks to Publicity Hound Jo Steinberg of Milwaukee for sharing Dr. Izzo’s advice. 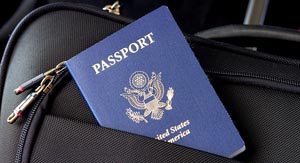 —Jeffrey Epstein wrote his will only two days before his death. Attorneys, therapists, professional organizers, financial advisors, authors, speakers and experts who can tie into this topic can offer tips on the consequences of not making out a will, even for people who don’t have a multi-billion-dollar estate and own two islands like Epstein does. How much time and trouble must a next-of-kin endure to get into a dead relative’s bank account? Or transfer a car title? Or find out exactly how much other money is out there and where? I’m friends with otherwise smart people in their 60s and 70s who own property and have investments and children. Yet they don’t have wills. We do people wait?

–Starting last year, the IRS has been denying new or renewed passports for U.S. residents who owe more than $51,000 in back taxes. This week, it sent letters warning that it will actively begin referring unresolved cases to the State Department for potential revocation. This decision affects thousands more people who are behind. CPAs, accountants, Enrolled Agents, attorneys, and travel agents, call your local TV stations and tell them you can offer tips on how people who owe can avoid having their passports revoked.

–The federal Centers for Disease Control and Prevention is investigating 94 sudden cases of severe lung disease linked to vaping in 14 states. Wisconsin, Illinois, California, New York, Indiana, and New Jersey have the most cases. This story is perfect for parenting experts, doctors, and clinics. Vaping store owners, is this much ado about nothing?

To do: Book a 30-minute or one-hour Rent My Brain session with me and we’ll discuss how to pitch your own angle on breaking news, and also how to promote yourself or your business in ways you’ve never considered.

If you’ve toyed with the idea of attending the National Publicity Summit Oct. 23-26 in New York City but you aren’t sure if it’s worth it, this might help you decide before the price goes up this Thursday.

But being covered by these media outlets isn’t, by itself, enough. You must know how to make the most of each interview so it helps you sell your product or service. That comes with the training Steve Harrison provides after you register and before you attend.

To do: Read more about what happens when you meet dozens of influential journalists behind closed doors using this affiliate link for the National Publicity Summit. 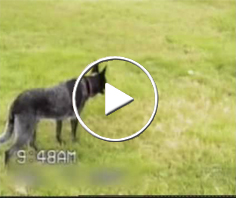 This dog listens to every command from his owner before getting the ball on the count of three. I wish I had a fraction of his patience.