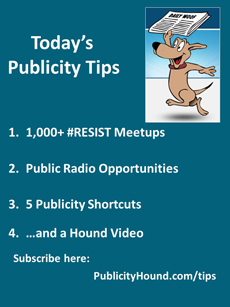 After watching a half dozen episodes of “Downton Abbey” from Season 1 over the weekend, I’m hooked. So hooked, in fact, that I’m Googling “little known facts about downton abbey” and spoiling it for myself. Some of those behind-the-scenes tidbits include interesting plot twists in Seasons 3 and 4. No more Googling! On this Valentine’s Day, however, I’ll confess my crush on John Bates, the valet.

Meetup.com, the giant online social networking portal that makes it easy to find offline groups devoted to a variety of topics, has added 1,000 #Resist Meetups in the U.S, Australia and the U.K. for people who want to meet others devoted to social justice topics.

In an email to members yesterday, Meetup wrote: “Last week, we created 1,000+ #Resist Meetup Groups to act as local hubs for actions on behalf of democracy, equality, human rights, social justice, and sustainability.”

Already more than 82,000 people have joined.

Meetups can be a valuable part of your publicity campaign.

To do: Find a #Resist Meetup near you here. If you’re looking for Meetup groups devoted things like patriots, making America great again and tax cuts, go to Google and search for: #maga meetup + (your location). Or search on the homepage using your zip code and see what’s happening near you. 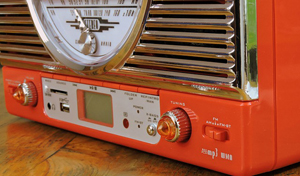 If you have a publicity topic perfect for National Public Radio, don’t overlook:

–Radio stations that are sister stations to PBS TV.

While looking for publicity opps for a client who wants to target media in central Pennsylvania, I found WITF-FM, a public radio sister station to the area’s PBS member station, WITF-TV. At their website, it took only a few minutes to find a program that might welcome my client.

“Real Life | Real Issues” has conversations with newsmakers and experts in a variety of fields and topics including the economy, politics, health care, education, culture and the environment. It even has Facebook and Twitter accounts. His topic falls into the “Pennsylvania culture” category, so this is perfect for him!

To do: When creating a publicity campaign, search for national, statewide, regional and local public radio and TV stations. Don’t only aim for the national NPR programs.

Landing a major publicity placement becomes more difficult as traditional media outlets shrink or disappear. That’s why you need every shortcut on the planet.

Steve Harrison is sponsoring a free call at 2 and 7 p.m. Eastern tomorrow, Feb. 15, that will teach you five specific shortcuts for landing your first (or next) big media appearance.

Five special guests will each explain their best shortcut. One of them, an author, wrote a book and did radio interviews but could never get the national media interested. After years of frustration, she finally found a way to land her first national TV gig on ABC. She has since been a guest on Dr. Oz., Anderson Cooper, CNN and even hosted her own special on Discovery Health. She’ll explain what you can do to accelerate your speed at getting your first or next big national break.

You don’t have to pay for the call, but replays won’t be offered later. Attend live, or miss it.

To do: Register for “5 Proven Shortcuts to Landing Your First (or Next) Major Media Appearance FAST” to be guaranteed a seat. 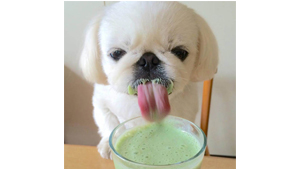 Konatsu, a fluffy white Pekingese, loves her smoothies. And that super-long tongue comes in handy!