How to create the social media press release 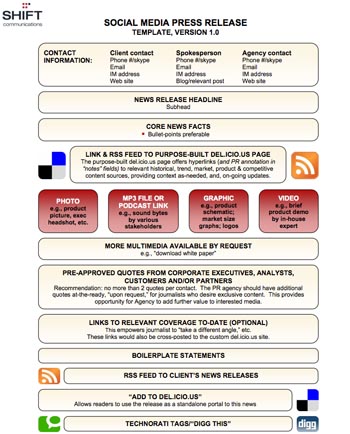 Now that you have all these new ideas for your press releases, how do you incorporate them into a press release neatly, so people can find exactly what they’re looking for?

How can you use one release to please journalists and consumers? How can you organize links for all those different multi-media features such as audio and video?

The folks at Shift Communications, a marketing and PR agency, created the first “social media press release” in 2006, and they invited you to copy it for your own use. iI was updated in 2014. The idea is to present a quick bird’s-eye view of the news in a format that will encourage sharing on social media.

“Although its early form was not at all flashy by today’s standards, its focus centered on the idea of PR practitioners becoming a better resource for journalists,” Shift says. “The social media press release was not meant to stand alone, but rather to supplement traditional PR collateral with highly sharable, highly relevant information that was easy to digest and utilize.”

I like the format, but I think a lot of old-school journalists won’t, particularly those that want you to spoon-feed information to them so they can simply cut and paste from your release right into their stories. So why not offer both, a press release written out like the ones you’ve seen in this course, and the social media release?

Note that Delicious and Technorati, two social media sites, have been discontinued. Their icons are shown on the social media press release at left. You can replace them with other social media sites like Pinterest and Instagram where you want your content shared.

Next: You’ll start Module 10 and learn how to optimize your press release for the search engines.