Use blurbs within the release

Before publishing your book, you should have collected several reviews and “blurbs.” These are short testimonials, ideally from famous people in your niche, about why they enjoyed the book. You can use these blurbs, as well as short excerpts from your book reviews, within your press release.

The release below is for the book Don’t Get Fooled Again by Conner O’Seanery. Paul J. Krupin of Paul Krupin’s Direct Contact PR wrote the press release which emphasizes the author’s expertise. I love the pithy quotes and examples of verbal signs of deception. This press release also flags its target audience. In the section “What People Are Saying,” it includes three of those valuable blurbs.

Expert reveals how to listen and look for a lie!

Heard the old joke? How do you know when a lawyer is lying?

And so it goes for most people. If you talk long enough, you’re almost certain to tell a lie … or be told one (even if you’re talking to yourself!)

Quick fact: Most people are likely to encounter over 200 fibs and fabrications each day – every day, no matter where they go in this world.

That’s the truth about reality today.

Conner O’Seanery has studied the ins and out of lies and lying and has created an incredibly useful tool so the rest of us will know when someone is trying to pull the wool over our eyes.

In his new book, You Won’t Get Fooled Again, he reveals how to spot the verbal and non-verbal signs of deception, and all the different ways people divulge they are lying.

“Lying takes effort,” he says, “and one of the keys to uncovering the bald-faced liar is knowing what to listen and look for.”

His book is a roadmap for finding the truth, whether you are navigating a business deal, interviewing candidates for a job, hunting for a previously enjoyed vehicle, grilling your teenager over last night’s party, or traveling with your partner down that long road of lively discussion and togetherness. [Fabulous paragraph about the target audience!]

So what are some of the verbal signs of deception?

B-b-b-bad To The Bone: A liar might stutter, stammer, and otherwise wrap his tongue around his forehead.

Pause & Insert Here: A liar may pause and insert odd, non-word sounds into his speech to fill the uncomfortable silence. Ah, er, um, oh and sometimes duh are a liar’s vowels.

Grunts & Groans: A liar might clear his throat often and make other strange, guttural noises.

Let Me Qualify This: A liar tends to make judicious use of namsey-pamsey qualifiers such as ‘however,’ ‘sometimes,’ and ‘generally,’ stitching his fast-and-loose excuses with this limp, verbal pasta.

Could You Repeat That?: A liar might repeat the question you just asked in order to buy time.

A Trapped Rat: Once cornered, a liar will probably deny he’s lying. He’ll claim with a nasally whine and a pounding fist, that that he has no reason to lie. Uh-huh. You know better – he has every reason to lie.

Smooth Talker: A liar might talk fast. And smoothly and convincingly. Hey, no one said this was easy.

“People will lie out of need, fun, laziness, or desire,” says O’Seanery. “Sometimes it’s done face-to-face. Other times it’s done behind the back. It’s done to lovers and it’s done to complete strangers. People everywhere are lying through their teeth.”

• The different reasons why men and women lie.
• The non-verbal signs that indicate when someone is spinning a yarn.
• The spoken signals that tip off when someone is talking out the back of his
neck.
• The best technological tools for busting liars.
• How to avoid falling in love with a “serial liar.”
• How to become a better liar when it comes to money, sex and friends.
• His Liar’s Hall of Shame.

“If your b.s. radar relies on someone’s nose growing like Pinocchio’s to catch a lie,” says O’Seanery, “then you will be taken advantage of again and again.”

No one wants to be taken advantage of, and you won’t once you’re armed with the tips in You Won’t Get Fooled Again.

You Won’t Get Fooled Again:
More Than 101 Brilliant Ways to Bust Any Bald-Faced
Liar (Even If the Liar is Lying Beside You!)
By Conner O’Seanery
Illustrated by Steve Reed

Available in bookstores nationwide and online.

Conner O’Seanery is a serial liar and the rumored co-inventor of Neutrinos, the odor absorbent line of men’s briefs that swept Europe in the mid-90s.

Steve Reed is the founder of Suspended Studios, a cutting edge (and honest) illustration company based in Corpus Christi, Texas.

Every Tipping Points Digest title is scientifically formulated for easy digestion and rapid absorption by time-crunched readers everywhere. The series grew out of a simple guiding principle: Give stressed-out readers straight information they can use to improve their lives and their relationships, but deliver it with twisted humor and terrific illustrations. Straight tips. Bent Delivery. Simple … and highly effective.

What People Are Saying

“You Won’t Get Fooled Again will stand as one of the funniest books on the subject. It serves…tons of tips, but twists straight-up advice into a hilarious pretzel that makes for a delicious read.”
— David J. Lieberman, Ph.D., Author of New York Times bestseller Never Be Lied To Again

“…not a replacement for the polygraph; however, this book is the next best thing. The reading is informative and entertaining, and the humor effectively takes the edge off a very serious question:
Have I been lied to? (Hint: you probably have!)
— Jack Trimarco, Polygraph expert, host of Court TV’s Fake Out

“As you belly laugh your way through You Won’t Get Fooled Again, don’t be fooled – it’s chock full of information. A fast read, read it on the run, on the jog or on the sit.
But read it! You’ll never be the same again.”
— Dr. Marcella Bakur Weiner
Relationship expert and co-author of Cheaters and The Love Compatibility Book

These can be informal partnerships and alliances. Explain why you’re partnering and how it will better serve your customers. 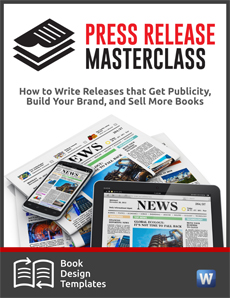 Do you know about all the opportunities for authors and publishers to write press releases? I’ve identified 15 of the most common types of releases and even created templates for you so you can save time writing. Each template is accompanied by a sample so you can see what the release should look like. This package comes with full instructions. Don’t miss one opportunity to write a press release. Learn more about my Press Release Masterclass: How to write releases that get publicity, build your brand and sell more books.