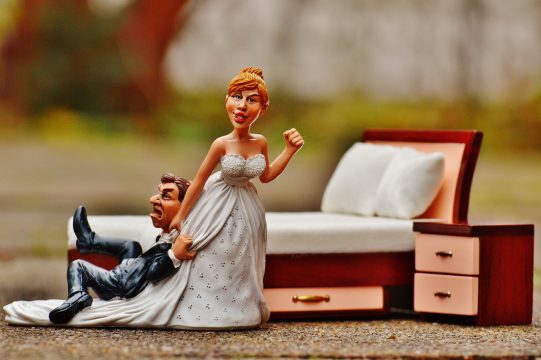 Years ago, I heard media trainer Joel Roberts say that if you want to get onto a big radio talk show, your chances skyrocket if you have a juicy topic that riles up listeners.

The idea must be so controversial or compelling that a motorist who listens to the show while driving gets angry enough that he pulls over to the side of the road, whips out his phone and calls the station to comment on the air.

I thought of Joel’s advice when I saw the results of a recent study from the University of Nevada in which researchers found that whenever a husband’s last name differed from that of his wife’s, he was frequently described in ways that both de-emphasized his masculinity and overemphasized any feminine characteristics. (I’ve even heard a few people refer to these guys as wimps.) The results were published earlier this month in the Sex Roles journal.

Right now, I can see lots of women motorists on that same busy highway pulling out their phones to call the station. They’re the ones who decided to keep their maiden names. But they aren’t even pulling over.  They’re going 70 miles an hour while dialing.

Why This Story Almost Guarantees Publicity

I love this story for so many reasons:

10 Ways to Newsjack This Story for Publicity

Consider these ideas for piggybacking onto this story or claiming it as part of your own, also known as newsjacking, the term coined by PR pro David Meerman Scott.

If you’re going after traditional media, it’s a good idea to offer some “extras” along with your pitch. Those include statistics, experts who are willing to comment on the opposite side of the position you’re taking, and other people such as marriage counsel0rs who can help create an entire segment.

Those are my ideas. Let’s hear yours. The comments section awaits….