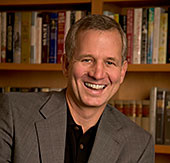 If you speak for free or for a fee, and you’re trying to generate media attention in towns where you speak, steal a great idea from motivational speaker Terry Hershey of Vashon, Wash.

When he speaks in communities throughout the United Staties, he tries to find a local angle that ties into his topic—something he can pitch to the media so they’ll view him as a local story, not as just another speaker who breezes into town one day and is out the next and wants free publicity.

Over the weekend, when I was visiting in Columbus, I saw him on the local NBC station’s Sunday morning news program. The segment showed him speaking at the First Community Church in Columbus as part of the church’s “Spiritual Seekers” series. It included archived video of Jake Porter, the 17-year-old special needs student from Northwest High School in McDermott, Ohio, who scored a touchdown for his high school football team several years ago during the last home game of the season because both teams were willing to change the rules. You can read the heart-warming story here and then watch the video here.

McDermott is about five counties from Columbus but close enough that, I suspect, it’s in the Columbus TV market which makes the Jake Porter tie-in the local angle. It was the perfect story for a weekend news program because it wasn’t competing with the newsier stories that break during the week. Terry said he received several emails from people in the Columbus area who saw the segment.

He offers these three tips to speakers seeking publicity in towns where they speak:

Rule #1: Speak to a person, not a department

When you call a TV station, ask to be forwarded to the person who is in charge of deciding which stories the news department will cover, and pitch the local angle. Include that person’s contact information in your records and start building the relationship. (My teleseminar series on ‘How to Create a Media Plan” includes a segment on how to create a targeted media contact list.)

The media love stories, Terry says. Any time you can tie your presentation to a local heart-warming, enlightening or inspirational story, you’ll score points with the media.

Rule #3: Do the media’s work for them

“Media people hate a speaker who wants a one-win story that benefits only them. You need to make it a win-win: a win for the station and a win for you.”

Here are three other tips, excerpted from my  “Special Report #21: 67 Great Publicity Tips for Professional Speakers”:

—Offer to help publicize your programs every time you book a speaking engagement. That includes mailing press releases to local media, being available for radio interviews and letting local reporters know about your program, in case they want to attend. Meeting planners will appreciate this thoughtful gesture. Take advantage of my free email tutorial on how to write a press release.

—Every time you speak before a group, offer to submit a short summary of your presentation for the group’s newsletter. Don’t forget to send your photo. It gets you in front of those you just spoke to as well as those who missed you the first time around. Many groups also send their newsletters to the media. Be sure the last paragraph tells people what you do and how to get in touch with you. Include your URL.

— Call the advertising department of every newspaper and magazine you want to get into and ask for a copy of their editorial calendar. It’s a free listing of all the special topics and special sections coming up during the calendar year. It will tip you off to sections where your story idea would be a good fit, so you can query the editor weeks and even months ahead. If you’re going to be speaking in that town, be sure to mention that in your pitch.