This guest post was written by Deb McAlister-Holland, a publicity expert who works for Distribion, a Dallas SaaS software company that makes marketing automation tools. She is also the author of 2 books, Slimed Online: How to get your online reputation back despite Google and The Customer Never Sleeps: 21st Century Marketing. She lives in Dallas, Texas. Visit http://debmcalister.com/ for more information.

I wrote my first press release decades ago, on an IBM Selectric typewriter. Back then, press releases were viewed as disposable documents created for one purpose – and only one purpose: to convince a small group of media gatekeepers to share something with the audience they controlled.

My boss had lots of rules about press releases. We were told how long they could be, what had to be included, what was never included, how many we could send in a month, and exactly how long the process should take to write it, get it approved by a client, get it distributed via fax, postal mail or press wire service, and how to follow up on it by calling the targeted journalists.

I was pretty good about following those rules for years, but I threw them out the window as the new century dawned. Good thing, too, because as the first decade of the 21st century came and went, it became crystal clear to me that the good old press release had been completely reincarnated in a new role – and anyone who hasn’t yet rethought the press release is missing a tremendous opportunity for low-cost content marketing.

What’s changed? Here are the four most important things that have changed in the way press releases function in today’s connected world:

The truth is that I send out more press releases today than I ever thought I would in the days when I viewed them as a way to convince someone else to write about my company. Ever since I learned that the press release itself was a great marketing tool to drive traffic, increase customer engagement, and boost my search engine rankings, I’ve discovered dozens of new uses for them.


The Proof is in the Testing

In February, 2011, when I started a new job as director of marketing at a SaaS software company, I put in what I thought was a routine budget request for a media data base – Vocus, Cision, MyMediaInfo – I wasn’t picky. I just knew that I would need a good database in order to add PR to my multi-channel marketing mix. The chairman of our board suggested I try a new service called MyPRGenie instead, and he arranged a free trial for me of their premium service.

That gave me the chance to try something I’d wanted to try for a long time: a head-to-head test to see just how much traffic press releases by themselves could drive to a website or blog. One of the content marketing strategies we launched was a new blog designed to expand our reach and introduce the concepts behind our products and services to new audiences.

The Distributed Marketing Blog published its first posts in late March, and from April through mid-June, I sent out an SEO-optimized press release with half of the blog posts, and posted the others without a press release. All posts – those with and without a press release – were supported with the same social media out-reach: links to our company Facebook page, updates on my personal LinkedIn profile, and tweets on the five Twitter accounts our company uses. 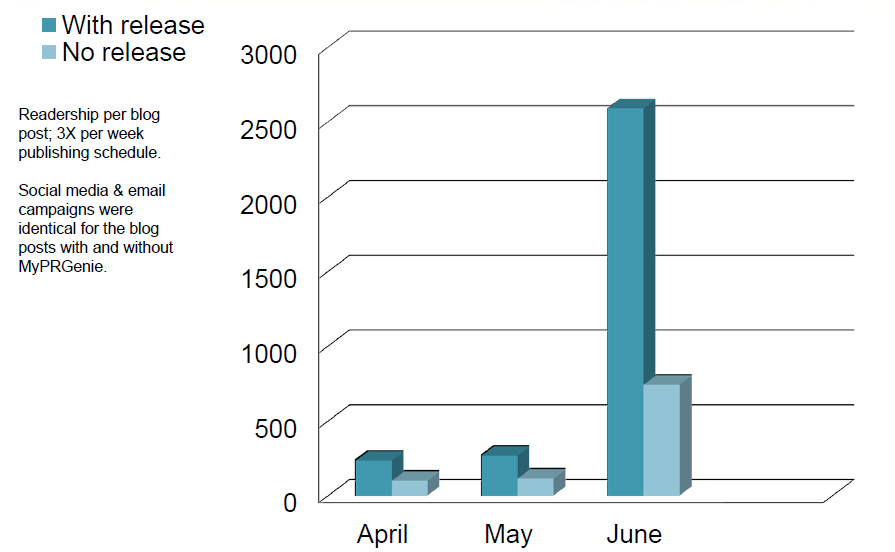 Of course, the June numbers presented here are just a little bit misleading – I had to remove about 200,000 unique visitors to our blog that month because one of those press releases we sent out resulted in pick-ups from PC World, CNET, BNET, Fox Business, Forbes, Fortune, and the Wall Street Journal (along with several hundred smaller blogs and publications).

So 12 weeks after we launched our blog, I had blown our traffic target out of the water, and gotten global exposure for our company and our blog – thanks to that old standby, the press release. It was just the first of many similar successes we’ve had this year.

Although no other post has gotten more traffic than that very first one, we’ve had eight posts so far that have gotten awfully close – and if I was keeping an old fashioned PR clip book, it would have over 980 clips from major publications and broadcast outlets in it.

Those “clips” came straight off the press releases we’ve sent out. In more than nine months at my job, I haven’t made a single phone call to an editor, attended a single press event, or done anything else that even smacks of the PR skills I have no time to use. I don’t have a PR firm. The only thing I’ve done is post SEO-optimized press releases on a single service that sends the releases with an email cover note to journalists, bloggers and analysts in their database.

Press Releases and So Much More

So I stopped testing, and started writing a press release for every piece of content I wanted to promote. In fact, whenever I post new content, I write four things:

Webinars, presentations, new blog posts, White Papers, trade show speaking engagements – you name it, we probably send out a press release about it. The distribution list for our releases ranges from a few hundred contacts in a particular industry to about 2,000 contacts for a more general topic.

Like other services, MyPRGenie has built-in SEO optimization tools, and that makes each release work overtime to drive traffic back to my content or website. The right words – the words my prospective customers use when they’re searching for products like mine – are critical in the strategy of using press releases to build traffic.

Perhaps just as importantly, every single press release (and every single piece of content) gets its own unique photograph or graphic.

I’m a “word person”, and I was slow to realize just how powerful great art is in building traffic for content marketing. But I’m a true believer now. A press release titled, “How to Become a Legendary Marketer” illustrated with a photograph of a knight in shining armor (who just happens to be my son, so the photo is especially attractive) gets much more attention than a press release with the same headline and no photo. How do I know? Because I tested that, too.

Here’s a look at two weeks’ worth of press release titles and images from The Distributed Marketing Blog. (Our total cost for the legal, licensed images you see here, by the way, was $12 – most of them were free. For a look at great free or low-cost art for your content, check out this post from my personal blog.) 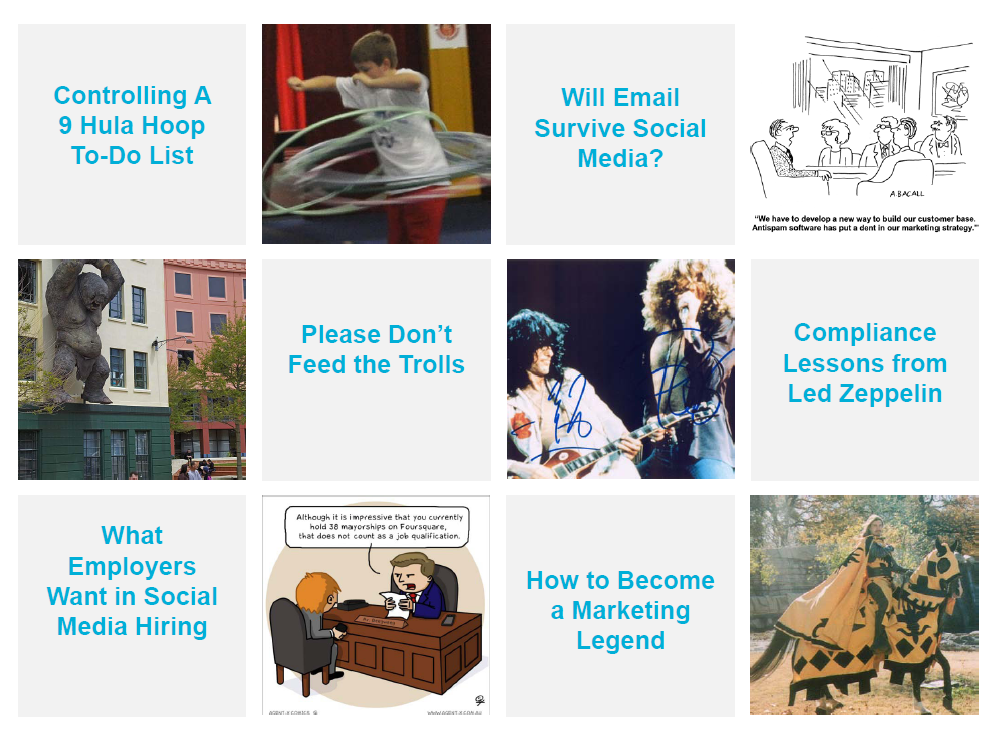 Last, but not least, we use the social media links available through the press release service extensively. Because all I have to do is click a button, I’ve been able to expand my social media outreach to services like StumbleUpon, Reddit and dozens of others that are well beyond the scope of my internal social media capabilities.

No Such Thing as “Too Many” Releases

So here’s the bottom line for me: press releases work, whether or not they results in direct coverage.

Long ago, I remember being afraid to send out too many press releases. It was expensive, and I worried that I’d overwhelm the small number of journalists I was targeting.

Now, I don’t have to worry about it. The people who read my press releases now do it because they want to. They’ve opted in to a distribution list, clicked on a link, searched for the keywords, or gone to a website where my release is featured.

As for the journalists, many of them are now paid at least in part on the number of readers they draw. From the standpoint of a blogger or journalist on a deadline, a press release offers:

Nearly 75 percent of all the journalists working today are freelancers – a complete turn-around from a time 10-15 years ago when high-paying jobs in journalism were the norm instead of the rarity they are today. For freelancers at even the most prestigious sites, compensation is usually tied directly to the number of readers they attract to their online posts.

The more articles they post, the more opportunities they have to draw readers. So they’re hungry for fresh content and fresh ideas in a way that their predecessors never were. It’s a hunger I’m happy to fill – and press releases remain the most cost-effective item on the menu for everyone.