If journalists and consumers are using Google to find someone with your expertise, and you’re not on the first page of the search results, they may call one of your competitors who ARE in one of the top three positions on the most popular search engine. 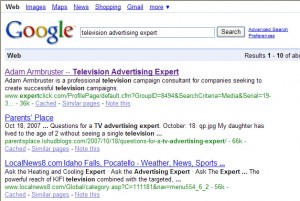 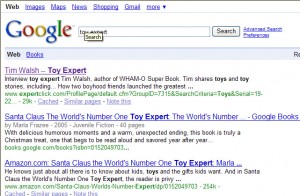 Or Debra Holtzman who’s in the #1, #2 and #3 positions for “child safety expert,” and driving her competitors crazy: 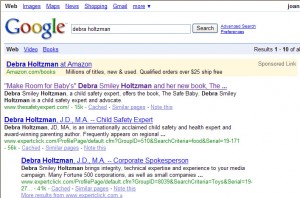 Adam, Tim and Debra have profiles in Expertclick, the Online Yearbook of Experts, which pushes them to the top of Page 1 in Google.  They’re also media darlings because journalists who use Google when searching for experts can find them easily.

As a result of his Google ranking and Expertclick profile, Adam has been interviewed by Boston Globe, E Television, the Daily Globe & Mail in Canada and appeared on FOX News to comment on Microsoft’s $300 million campaign to resuscitate Windows Vista via pitchman Jerry Seinfeld. You can watch it here.

Tim Walsh’s biggest media hit was an appearance on CNBC’s “The Big Idea” with Donny Deutsch.  Donny interviewed Tim for a segment on how to be successful after you’ve been rejected.  Several toy companies rejected Tim’s idea for a board game called TriBond in which players have to guess what three seemingly unrelated things have in common.  After nobody else wanted it, he manufactured it himself and sold 3 million copies.

The Washington Post called Tim for a story on Wham-O’s 60th anniversary because he’s the author of “WHAM-O Super Book: Celebrating 60 Years Inside the Fun Factory,” which will be on book shelves in a few weeks.

KGO radio in San Francisco called him for an interview on Wii, Nintendo’s electronic game “and I’ve gotten a ton of smaller media hits as well.”

Debra has received a  mountain of publicity because of her #1, #2 and #3 ranking on Google and her profile in Expertclick. She has been featured as a safety expert on NBC’s Today Show, Dateline NBC, CNBC Asia Market Watch, MSNBC, Associated Press Radio, and in Parenting Magazine, Newsweek, Child Magazine, Star Magazine, Us Weekly Magazine, USA Weekend Magazine, Reader’s Digest, First For Women Magazine, Boston Globe, Washington Post and Family Circle Magazine.

The other big advantage of Expertclick is that you can post up to 52 press releases a year, which are picked up by the Google and Yahoo news feeds,  at no additional per-release charge.  I have an Expertclick subscription, and you can see my press releases here.

Tomorrow is the deadline for Publicity Hounds to save $250 on the price of an annual Expertclick subscription, normally $995.  Mitchell Davis of Expertclick will let early birds save $150 if they subscribe by Sept. 30, and an additional $100 if they mention The Publicity Hound or use this link: https://www.ExpertClick.com/discount/Publicity_Hound

If you call Mitch and his staff at 202-333-5000, they will take your call personally and answer your questions.  Don’t miss out and have to wait another year for an opportunity like this one.