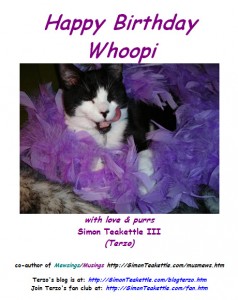 Just as Joan Stewart is The Publicity Hound, I’m tied to my famous cat, Simon Teakettle.

Dubbed “the cat who owns the company” in an article in Business Week and on MSNBC.com, his persona has gone through three actual feline incarnations, but the company name, Simon Teakettle Ink, and the website remain constant.

Naming your company and website after a pet can be helpful if you want to avoid the common trap of selecting a name that turns out to be popular with others. Names containing the words dream, communications, writer or any variations of these turn up a vast number of companies and websites in search engines.

Using your own name can be tricky, too. If you Google Barbara Graham, you’ll discover the infamous killer, and only if you use my full name, Barbara Florio Graham, will the sites connected to me show up. But I decided not to use my name for my company or my website for several reasons.

Smart Reasons to Use a Pet’s Name

First, Florio is too easily misspelled. Even when I provide my name to an organization in advance, my badge often turns up with either Floria or Florida.

That brings me to this tip. 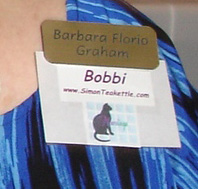 When you’re representing someone else, as the publicity point person, create a badge with your name in large, sans serif type, and the company name below and take it with you everywhere you go. You can often use a company business card that includes their name and logo in a larger badge holder, and place a card behind that with your name, so it shows above the company card.

The second reason why I didn’t want to use my own name for my company was the possibility that I might marry. My partner would want to be considered an equal, not part of Barbara Florio Graham and Associates.

Having a company name also lends credibility, especially to a sole proprietor who may be seen as a lightweight. You want to be taken seriously by the audiences you address, whether in person at an event where you’re handling publicity or serving as the spokesperson. That goes for emails, press releases and other communications too.

We’ve all heard about the importance of branding. I see too many entrepreneurs who have adopted different names and websites for different products, books and enterprises, diluting their impact. It’s important to be consistent across your entire platform.

Naming my company Simon Teakettle Ink was the result of my cat being featured on CBC radio so frequently, and on so many network programs that I worried that someone would steal his unique name. Registering it as a company name offered protection, but also allowed me to remain anonymous and let the cat communicate without revealing the name of The Lady Who Shares His Office.

I learned quickly that the radio audience remembered Simon Teakettle more than anyone else who contributed to the programs. One host I hadn’t contacted before even remarked how pleased she was to finally receive a letter from Simon Teakettle.

Human fans are often ignored, but pets are a different story.

Lions and Tigers and Bears, Oh My…

Any pet can help you widen the reach of your communications. It could be a cat, dog, parrot, ferret or horse. There’s an obvious advantage to using a pet you own now, or a previous pet if you have a large variety of photos. Pet pics can be used in social media posts, but also in other ways you may not have considered.

Simon Teakettle, for example, sends greeting cards to the media. Media personalities can be turned off by cards sent by humans, but when it’s a pet that’s the spokesperson for a company, it’s not only acceptable but memorable.

That’s one way Simon became so well known. We knew we were reaching our target when Simon  received a signed photo from Whoopi Goldberg after sending her the homemade birthday card you see above.

I’ve taken promotion related to Simon Teakettle even further. He has a blog and a fan club, both of which have allowed me to provide links to colleagues, as well as to organizations I support, such as the Great Canadian Theatre Company, where  he even has a seat in the theater, and NEXUS percussion.

Simon Teakettle Ink has his name on the theater wall listing patrons, and sends a new poster each month to the box office to post on their bulletin board. That means theater patrons as well as staff are exposed to Simon’s name and image.

He became so popular with subscribers that the theater company asked him to pose for their 2013 Christmas card. The back of the card credited me with the photo, and gave the website address. It was sent to all of the theater’s contacts, including its board of directors, program advertisers, subscribers and local politicians.

We’re also a patron of the Orpheus Musical Society, where the company name appears in all the programs.

Tips for Promoting  Your Pet 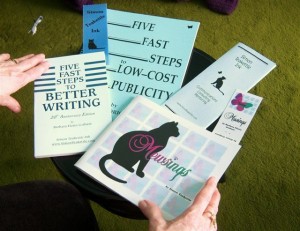 If you want to do this, set up link exchanges with those who can cross-promote, and find a common topic you share which will allow you to comment on their Facebook posts or blogs.

Simon Teakettle has had a calendar since 2011. These are sold, but can also be used as promotional tools. We have laminated bookmarks for Mewsings/Musings, which list the website. Many people will keep a sturdy  bookmark featuring a pet but might discard a flimsy one promoting some other type of book.

I continue to extend his reach beyond North America.

A friend who writes for several German magazines asked me for an article about Simon’s MEWSical Society and Fan Club to translate and send to a German pet magazine. I was also able to place my award-winning article, Training Your Cat Like a Dog, with the largest pet magazine in India, Creature-Companions.com.

His virtual MEWSical Society has members from nine countries, and the exploding fan club has photos of more than 200 cats, 100 dogs, and 18 other species, from 21 countries on five continents. All this drives traffic to the website because we provide reciprocal links.

Promoting other pet sites, including breeders, rescue groups, veterinarians and authors of pet titles, is a win/win.

The Pet’s Point of View… 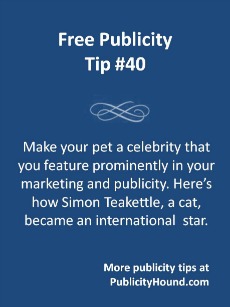 But it’s important to make sure the pet has a consistent point of view. From the beginning, Simon Teakettle has promoted responsible pet ownership, including spaying and neutering. We were also careful not to tell harsh anti-dog jokes, or anecdotes describing bad behavior.

The pet can be a bit naughty, but never mean or nasty. You aren’t creating a comedy routine, but rather a personality people can relate to and trust.

Terzo, aka Simon Teakettle III, writes about birds as sources of delight that he watches from inside, instead of pursuing and tormenting them. Mice, however, are fair game!

If you feature a dog in your blog, don’t let it talk about chasing cats or running after cars! Never sacrifice integrity to humor.

That trust factor is key.

It has allowed me to build a compelling and popular website, only a small portion of which is cat-related. Whatever I’m currently promoting is on the home page, along with links to Simon’s blog and fan club.

What about you? Do you incorporate  your pet into your business? How? Feel free to share links.