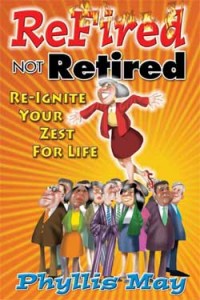 “March 1 is my day in Chase’s Calendar of Events.  It’s ‘Refired not Retired Day’ and it’s also the title of my book. It’s a humoprous book that shows people how to make the most of life after retirement.

“Might your Publicity Hounds have suggestions for things I can suggest for people to do on March 1? Amazingly, because I have a Google Alert, there is a restaurant in Australia that has it on their calendar. I wrote and told them I thought I should be there but they didn’t respond. Darn.

“One time I saw an assisted living facility promoting it but I truly don’t know any BIG ideas. Can your creative readers help?”