It has happened to presidents, vice-presidents, CEOs, athletes and even reporters.

Those who witness it relish in enjoyment while those on the back end are utterly embarrassed. It’s called being unaware of the “hot mic” and saying something intended to be private. Hot mic situations happen more often than you realize.

It’s so commonplace that Time Magazine has compiled a list of the Top 10 Hot Mic Moments in history. They include Prince Charles commenting that “I hate these people” during a media event with 50 journalists, and French President Jacques Chirac’s criticism of England that “The only thing that they have ever done for European agriculture is mad cow disease.”

How do you make sure your slip of the tongue doesn’t end up on YouTube or the lead story on the 5 O’clock news?

Everything is On the Record 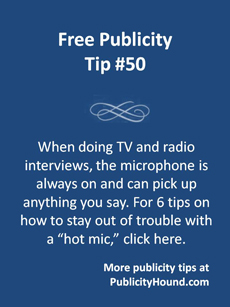 Here’s the short answer. When you sit down for an interview at a TV or radio station and the production crew puts that mic on you, nothing you say is off record. Even before the interview, when someone in the studio attaches your mic and the audio person asks for a mic check, don’t say something in jest that you don’t want shared beyond the studio. Once you sit down in the chair, you are now on their turf and they can use anything you say.

Recently, in the city where I live, a reporter—yes, a news reporter—was scolded by the public for his off-color remark during a live interview. He said that had not been for the breaking news of an officer involved in a shooting, it would have been a slow news day. What the reporter didn’t know was that his microphone was still on. People listening via livestream on the station’s website heard the comment. The audio person at the news station didn’t turn off the reporter’s microphone after his live report.

The officer miraculously survived being shot in the head, but the reporter barely survived the tongue lashing and berating he received from viewers on social media.

How to Respect the Mic and the Camera

Here are five tips for staying out of trouble.

In my producer days, I hated when guests arrived late. Unless told otherwise, I recommend arriving at the studio 15 to 20 minutes early.  This helps the producer and crew and puts them at ease. It helps you, too, because it gives you a chance to collect your thoughts and not feel rushed. When people are rushed, they overcompensate by talking too much.

The more you say, the more you stray. Many spokespeople are misquoted because they say too much. Instead of spending most of the interview providing reporters with too much information, write a one- or two-page fact sheet that lays out the basic facts.

3. Know what you’re walking into.

Will it be a live interview or taped? Who will be conducting the interview? Can you submit questions ahead of time? How long will the interview be? Ask those questions and any others so you’re prepared, and avoid being blindsided.

For some reason, people think they can’t ask the media questions. But if you don’t ask, you won’t know.

4. Be on guard during commercial breaks.

When they break to a commercial, remember that the mic is still on. This is a good time to take a deep breath, gather your thoughts and say as little as possible.

5. You aren’t home free when the interview is over.

Anything you say before you walk out the door can be used against you, so be careful.

6. Understand the relationship with the media.

I like to think the media isn’t blatantly looking to throw you under the bus, but they also live for a great sound bite. Even if you have a contact in the media, don’t compromise or put them or yourself in a tough situation by thinking they’re on your side. The journalist and you both have a job to do. They have a story to report, and you have one to tell.

Preparation is key. When you prepare for the interview, there’s less opportunity for things to go awry. When you respect the microphone and camera, it pays off.