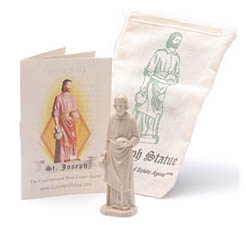 With a glut of houses on the market and few buyers, here’s an almost guaranteed way for you to get free publicity for a house you’re trying to unload—and maybe even a quick sale.

This is just one of several great publicity ideas for real estate agents, too.

An old superstition says that burying a St. Joseph statue upside down near your house will result in a sale. I first heard about this back in the mid-90s when my husband and I had trouble selling our house on the Pennsylvania-New Jersey border. I had already moved back to Wisconsin to take a job as editor of The Business Journal in Milwaukee, and he was stuck on the East Coast until we sold the house.

Just as we were getting desperate, a co-worker told me about the St. Joseph trick. Willing to try anything, I bought a statue and shipped it back to Pennsylvania. While we waited for results, I wrote a column about it for The Business Journal. While searching through some old files this week, I found the column, as well as the follow-up column describing feedback from readers.

No other column I have ever written in my 22 years as a newspaper editor and reporter resulted in as many responses as these two did. In fact, Google “St. Joseph statues” and you’ll even find website after website of St. Joseph statues, including one site that sells the St. Joseph Statue Home Sale Kit shown in the photo above.

So what does this have to do with getting publicity for your house sale? Or for your real estate office? The old cliche “desperate times call for desperate measures” was never more relevant than it is right now, after a tumultous few months of foreclosures.

If you’re a real estate agent or a seller, and you’re willing to discuss your experiences with the St. Joseph statue, local, regional and national media might pounce on the story. It’s quirky. It’s fun. And it brings a little levity to an otherwise grim housing market.

I’m beginning to think I’m the last house-seller on earth to finally succumb to the superstition of the St. Joseph statue.

When I complained to a friend a few months ago that my house in Pennsylvania still hadn’t sold, she gave me advice that apparently everyone else has heard.  That is, bury a St. Joseph statue upside down in your backyard and the house will be sold.

Then I heard it again from a co-worker who admitted he cheated by burying a picture of St. Joseph upside down just when he was feeling desperate.  But he sold his house anyway.

I’m not superstitious. Besides, I reasoned, the interest rates and our asking price were so low that surely somebody would bite.

That brings us to July 1995—some 13 months after we listed our four-bedroom Colonial that sits in the shadows of the Pocono Mountains near New Jersey.

We’ve dropped the price five times.  We’re offering a bonus, on top of the commission, to the real estate agent who brings us an offer we accept.  And we’re doing our best to survive the commuter marriage we’ve struggled through since October last year when we moved back to Wisconsin to join The Business Journal.

So there I was about a week ago on one of the hottest days of the year, fighting a traffic jam during my lunch hour on the way to Janzer’s store on Capitol Drive to buy a statue.

“Do you sell St. Joseph statues?”  I asked the woman behind the counter.

She led me down an aisle to a display case, carefully removed a tan, 5-inch statue, and turned it upside down to check the inventory number.

Then she went to a nearby storage cupboard and took a small cardboard box from among dozens of other boxes stacked there.

“Do you know what they are used for?”  I asked.

“We do,” she replied, the corners of her mouth breaking into the tiniest of grins.

“Based on what our customers tell us, they do,” she said.

Not another word was exchanged.  I raced back to the office.  Within hours, St. Joseph was on a UPS truck, headed for Pennsylvania.

My husband is standing by, ready to bury this thing.  But we’re getting conflicting reports from all quarters on the proper protocol.  Those offering advice are almost passionate about explaining the exact way it should be done.

Should my husband start digging in the front yard or backyard? Should he bury the statue upside down, right-side up, or on its side?  Head pointed away from the house or doesn’t it matter?

If we accept an offer, what do we do?  Unearth St. Joseph and bring him back to Wisconsin for good luck?  Don’t touch him, somebody warned, or the whole deal will fall through.

I’ll bet lots of you have your own stories to tell.  Surely real estate agents know about this stuff.  My own agent here in Wisconsin swears by the powers of the statue, but she isn’t sure about the burial etiquette.

As for the clerk at Janzer’s, I suspect she knows plenty.  But at the time, I was too embarrassed to ask.

Here’s the column I wrote a few weeks later:

Centuries from now, when archaeologists sift through the ruins of southeastern Wisconsin, can’t you just picture them scratching their heads as they begin unearthing hundreds—maybe even thousands—of St. Josephs statues?

I now they’re out there, because you told me so.

They’re concealed beneath garden plots, flower beds, shrubbery and patches of crabgrass in front yards, backyards and every plot of land inbetween.

If there’s a desperate house-seller like me, chances are good there’s a St. Joseph statue buried nearby.

Sorry I haven’t gotten back to you earlier to report on the results of my little survey from several weeks ago.  But I’ve been busy taking your calls and reading the yellowed newspaper clippings you sent about how this whole thing got started.

I’ve also been on the phone with my husband, who’s still living in Pennsylvania, making sure he follows the directions you gave me so we can finally unload our house after more than a year.

The protocol, I’m told, goes something like this.  Bury the St. Joseph statue upside down in your backyard and then wait for the offers to start rolling in.  Some of you follow that ritual with a seven-day novena to St. Joseph, the patron saint of households, families and laborers.  Others spend a few bucks on a newspaper ad that says something like, “St. Joseph, we pray to you,” thus also making him the patron saint of newspaper classifieds.

After the house sells, unearth the statue, take it with you to your new home and display it prominently as a way to thank the fellow who made it all possible.

Marion Nelson of Milwaukee sent me an old newspaper clipping about a New Jersey woman whose husband was laid off from his job at a stone quarry near the turn of the century. The women owned a small St. Joseph statue, tied a long piece of string around its neck and hung it from her roof in the middle of winter, with the vow that she wouldn’t remove it until her husband was called back to work.

The statue got quite a beating from those wicked East Coast winds.  A few months later…well, I’m sure you can guess how it all ended.  In fact, the statue worked so well that the woman started burying it everywhere and reaped the benefits of one miracle after another.

Someone else told me the practice started when a group of nuns from way back couldn’t afford a plot of land on which they wanted to build a convent.  So they buried a St. Joseph statue there and—voila!—a convent was erected.

The most incredible story I heard—some might say right out of the Twilight Zone—came from Marie Cutraro, who was desperate to sell her home near North 48th Street and West Villard Avenue in Milwaukee about four years ago.  It was a frigid March day when she wanted to bury her statue, but the ground was still frozen.

So her husband piled charcoal on the ground, started a fire and kept dousing it with gasoline to keep it going until the ground finally thawed.  Then he dug a hole and dropped St. Joseph inside.

A few days later, the couple left on vacation.  While they were away, they got a call from their real estate agent.

“She told me to break out the champagne because we got an offer in our price range,” Mrs. Cutraro said.

Here’s the kicker.  The buyers made the offer on March 19, the feast of St. Joseph.  I can just see all you good Catholics nodding in unison and saying “I told you so.”

As for me, I’m still waiting.  My husband buried our statue in a shoebox a few weeks ago in our backyard.  The next morning, he found it laying on top of the ground, with little chips in the base, and the shoebox ripped to shreds.  We figured the neighborhood raccoons dug it up, hoping there was food inside.

St. Joseph since has been returned to his cardboard coffin where he rests, safe and sound, one foot under.

I visit Pennsylvania every few weekends.  And we always discuss whether to lower the price of our house once again.  But from now on, I’m not taking any chances.

On my next visit, I’ll have another statue in tow, and an extra long piece of string.

The rest of the story 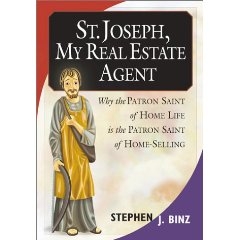 We buried the second statue. After only a few weeks, we got not one, but THREE offers within 24 hours. We accepted an offer at a ridiculously low price and, 14 months after we listed it, took a huge loss on the house.

The world is filled with so many stories similar to mine that in 2003, Stephen  Binz wrote the book St. Joseph, My Real Estate Agent. It includes lots of those stories.

But not everything works out for the best.

One home seller who wasn’t seeing any results moved his statue from the frontyard to the backyard to the side of the house. Eventually, he threw it in the trash.

A few days later, he opened the newspaper and saw the headline “Local Dump Has Been Sold.”