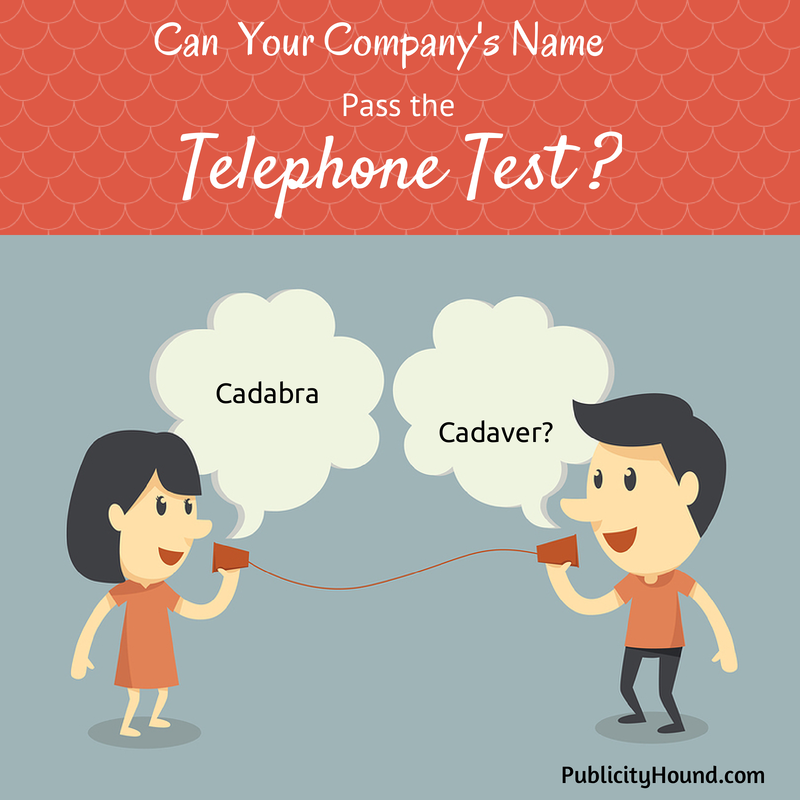 He had second thoughts about the name, however, after talking to his lawyer on the phone one day.

“Cadaver?” repeated the lawyer in astonishment.

Bezos changed the name of his ecommerce company to Amazon, as you have undoubtedly figured out. It’s fun to speculate how ecommerce might have developed differently with a trailblazer that bore a name that sounded like a dead body.

More important, though, is a lesson that’s still being belatedly learned all over the world by entrepreneurs who send their products and companies out into the world with names that flunk what I call the “telephone test”: Can people understand the name when it’s pronounced all by itself on the telephone?

After all, when you publicize your product or company, or even just carry on routine business, you’ll have to say its name to others over the phone – and on the radio, where people may get interviewed by phone. If people misunderstand and either laugh or cringe, or can’t understand the sounds you uttered, you have a big strike against you. And if folks who hear it tend to repeat it wrongly, that likewise puts an obstacle in the way of your success.

Sounds come through less clearly on the telephone, according to Rebecca Shafir, a speech/language pathologist and brain fitness expert who is the author of The Zen of Listening.

“Telephones make speech sound artificial because they filter out sound frequencies under 250 hz,” Shafir says. “Phones also filter out frequencies above 3000 hz, leading listeners to confuse ‘s’ with ‘f’ and ‘b’ with ‘d, ‘t’ and ‘v.’ Accents, room acoustics and background noise may complicate the signal further.”

Factors that can get in the way of a name making sense to the ear include unfamiliar or foreign sequences of sounds. Zion National Park in Utah was originally called Mukuntuweap – its Paiute Indian name. In 1918, the director of the newly established U.S. National Park Service changed its official name to Zion on the grounds that people feel more comfortable visiting a place when they can pronounce its name.

Comprehension suffers when syllables don’t follow English-language patterns – as with Internet startup names like GlibJix, Kazalup and Blaxnort (which I made up, but without exaggerating).

Just how easily our minds jumble up what’s coming into the ear can be seen in the many comic versions of song lyrics, where people hear the Beatles line, “The girl with kaleidoscope eyes,” for example, as “The girl with colitis goes by” or “Gladly the cross I’d bear” from a church hymn as “Gladly, the cross-eyed bear.”

Likewise, someone who’s not from California can mishear PG&E, that state’s big utility company, as “Peach Eating.”

How to Test Your New Name

Putting a name to the telephone test is simple. Actually use a phone and tell someone who knows nothing about your business the name you’ve chosen or are considering. Repeat this several times with different people.

If you have to spell the name or explain it to have them understand it, or if they react like Jeff Bezos’s attorney, go back and brainstorm more.

Through September 10, get $20 off Marcia’s new “Renaming Your Business” online course with this coupon.  This course is perfect for companies and nonprofits that are considering changing their own name or the name of a product, service or event.

Known worldwide as an expert on creative publicity strategies, Marcia Yudkin is the author of 6 Steps to Free Publicity, Publicity Tactics and many other books. As a reflection of her own preferences and the clients that are most drawn to her, Marcia has in recent years championed introverts and no-hype marketing. Follow her on Twitter (@marciasmantras) or explore her content-rich website at Yudkin.com