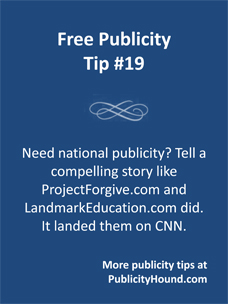 Speakers know that if they can tell an emotional story from the platform, they’ve got the audience in their hands.

Authors have perfected the art of storytelling, too, to sell millions of books.

And Publicity Hounds who can tell a compelling story can generate mountains of national publicity.

Publicist Michelle Tennant Nicholson, Chief Creative Officer for Wasabi Publicity, used a gut-wrenching story that tied into her client, Landmark Education, and ended up on Soledad O’Brien’s show on CNN earlier this year.

She had been looking for a good story to pitch to her contacts at CNN and saw that the Detroit Free Press had covered the story of a documentary called Project Forgive, being developed by TV producer Shawne Duperon, a six-time Emmy winner, and Gary Weinstein. The documentary tells the incredible and complex story of how Weinstein, of Farmington Hills, Mich., has forgiven a drunken driver for killing his family in a 2005 crash.

Tom Willinger, who was driving at 70 miles an hour in a 45 mph zone, smashed his SUV into the back of Judith Weinstein’s Honda Accord as she waited to make a left turn, killing her and her two sons.

Weinstein and Willinger lived less than a mile apart. Their children went to the same school. Duperon knew both families.

She and Weinstein had learned all about forgiveness in a class they took years earlier through Landmark Education, which sponsors programs for living an extraordinary life.

Duperon knew the forgiveness story was perfect for a documentary and started raising $30,000 for its production through Kickstarter, the world’s largest funding platform for creative projects.

When the Detroit Free Press printed the story about the documentary in April this year, Tennant read about it and knew it would be perfect for CNN. She pitched it, and CNN said yes. Here’s the segment that ran on Soledad O’Brien’s show:

The story aired on a Friday, and by the end of the weekend, Duperon had reached her $30,000 goal.

Tennant, who calls herself a “Storyteller to the Media,” was able to pitch a perfect story for TV. But your story doesn’t have to be as emotional.

Steve Farnsworth, Chief Digital Strategist at Jolt Digital Marketing, says you can present compelling content even when you use a simple press release to tell a story and make it come alive, instead of announcing the same old stilted corporate drivel.

The next time  you have news to announce, try to weave drama, emotion and characters into a story that the media and its audiences can’t resist.

This is the 19th in a series of 50 Tips on Free Publicity on Pinterest. If you like it, click one of the buttons below to share it with your friends and followers. You can also pin the image by clicking the “Pin It” button above.