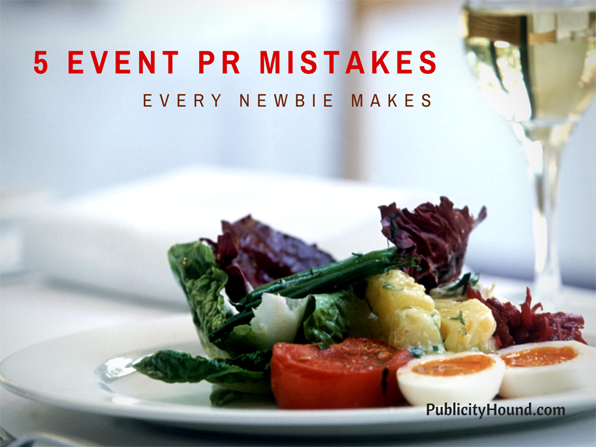 Event PR is a special breed of publicity.

Whether you’re just starting out in this niche or you’re taking on event PR yourself for the first time, there’s a lot you need to know. Being new to anything, you’re sure to make a few missteps at first. But if you know what common mistakes PR event newbies make,  you can avoid a few big problems.

When you start to spread the word about your event, it’s not the time to become a minimalist. Time, date and focus are just the beginning.

You want as many details as would interest your audience. Some details you want to include are the notable attendees, the entertainment, the food, and any swag.

Know your audience, too. Is it a kid’s event? If the Wiggles are your entertainment, it’s a really big deal.

Conference goers often focus on the presenters, so you want to lean heavily on who will be on the panels. On the other hand, if you’re hosting a bunch of foodies, the catering will be a big draw.

Newbies often make the mistake of overpromising in the publicity blitz leading up to their events. Don’t let the excitement of trying to get butts through the door have your mouth writing checks your event can’t cash.

Confirm everything and only publicize confirmed details.

Avoid embellishing, too. You may think a few dozen bottles of champagne is an open bar. But depending on your crowd, your numbers, and the event, that could turn out to be just a toast. And if your guests come expecting one thing and getting another, you might find yourself with an angry crowd.

Mistake #3: Expecting Media to Find You

Publicity is all about working with the media to get your message to as many ears as possible. So when newbies do things like post a press release on their website and call themselves done promoting an event, it’s a head scratcher.

The media doesn’t go to you, you go to it. You should be distributing your releases to every relevant channel possible. The keyword here is “relevant.”

If you’re working in a niche where you have some pull on social media, take the time to invite influencers personally. This is not the same thing as sending out Facebook invites to 400 of your random friends. Instead, send out individual messages inviting them to your event. If you’re still building contacts, consider using a reputable distribution service, such as iSentia, to reach out to the right people.

There was a time when a straightforward text release by fax was all you needed to get attention. Today, you’re sending your releases by email and through social media platforms and it’s easy to get lost in a sea of noise. No matter how well written it is, you’re going to need more than three paragraphs of text talking about how great your event will be.

You can now add texture to your releases by including video, images, embedded content, etc.

Let’s say your main draw will be a speaker. If you have a video clip of her shown at a previous speaking engagement that will make her more appealing, embed it in the release. Boring releases are deleted without a second thought so everything you can to avoid that.

Here’s a fun video that Get City Dealz, a New Orleans business, embedded in its press release on BusinessWire two years go. The video illustrates how Get City Dealz is teaming up with a new boutique in the French Quarter to help them both reach out to tourists and visitors just in time for the 2013 Super Bowl and the upcoming Mardi Gras celebrations.

Mistake #5: Thinking the PR Part is Over When the Event is Over 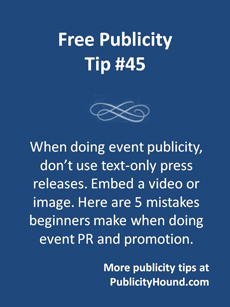 Publicity isn’t just about making a lot noise before the event. Follow-through is everything.

Now that your event is over, you need to promote the story using photos and videos from the events. A post-event release—with attendee numbers, recaps and quotes from notable attendees—can be a useful tool for getting a head start promoting the next event.

Being new to PR or even event PR doesn’t mean your event will automatically be a flop. But if you avoid the common pitfalls newbies fall into, you’ll boost your chances of success considerably.

Jen Thames is Off Site Specialist for WebMoves.net. She has a background in online marketing and content management and has been in the web development business for seven years. Jen enjoys sharing social media, marketing and PR tips for online businesses and on site SEO. You can find Jen on LinkedIn and Twitter.