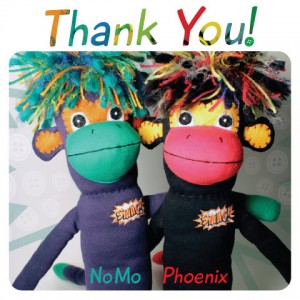 If you think your idea for a crowdfunding project is too “out there,” and that total strangers will never fork over their hard-earned money to make your dream come true, a closer look at this social media phenomenon might convince you to just go ahead and ask.

Crowdfunding is a way to get financial help, even from people who don’t know you, by making them so enthused about your project that they’re eager to help you pay for it. Here’s the best part: You don’t have to pay them back. the money can be used to develop the project, market and publicize it, pay vendors or cover any other expenses.

In 2013, thousands of entrepreneurs, inventors, nonprofits and others raised more than $5 billion through crowdfunding sites like Kickstarter, Indiegogo, Pubslush and GoFundMe to pay for a wide variety of projects. Here are some of the more offbeat ones:

–Within 24 hours, Jennifer Windrum raised $5,000 for making a protoytpe for sock monkeys and manufacturing them. The SMACs (Sock Monkeys Against Cancer) are a gang of monkeys that provide tangible support to those with cancer, reminding them no one fights it alone.

–Amanda Palmer, lead singer of the Dresden Dolls, asked for an ambitious $100,000 to cut a record. Total raised: More than $1.1 million.

–Using GoFundMe.com, Jennifer Haron raised more than $1,000 to surprise her husband with a trip to New York City for his 30th birthday.

–Author and self-described rabble-rouser Penny Rosenwasser met half her goal of $7,500 in two days and raised a total of $10,097 to publish and promote her book “Hope into Practice: Jewish Women Choosing Justice Despite Our Fears.”

–Brain Dwyer raised $16,587 on Kickstarter to create the world’s first pizza museum in Philadelphia to house the world’s largest collection of pizza memorabilia.

Learn How on March 6

The webinar “Crowdfunding: How to Use Other people’s Money for Your Book or Project,” has been rescheduled for 4 to 5:30 p.m. Eastern Time on Thursday, March 6. Guest expert Judith Briles, a book shepherd, has successfully used crowdfunding to raise money for her author clients. She knows the best ways to get started, the booby traps to avoid, and how to encourage people to push you past your goal.

Register here and you’ll get a bonus handout of the most popular crowdfunding websites. If you already have plans that day and can’t attend live, register anyway because I’ll send you the link where you can watch the video replay and access the rest of the bonuses.