If you’re planning a special event like an industry convention or a speaking engagement, even a teleseminar, invite the Twitter community to buzz about it.

At the opening session, announce from the stage or your teleseminar call  that participants who tweet about the event should use a hashtag, and then tell them what tag you want them to use.

A hash tag is the character # followed by a short word that describes the event, or a particular topic, on Twitter.

For example, at the Stompernet Internet marketing event I attended over the weekend, audience members were asked to mark their tweets by typing “#Stompernet” within each one.

That makes it easy for other attendees, and even people who didn’t attend the event, to go to Twitter’s search box at  and type in “#Stompernet” and find all the tweets about the event, like this: 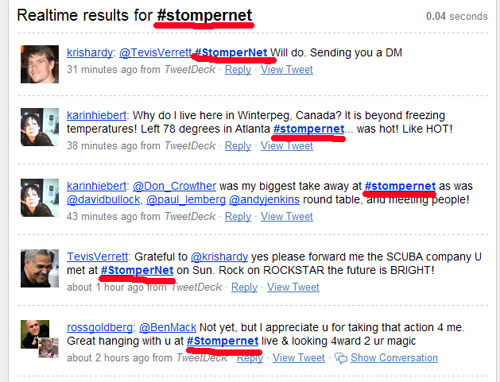 You might be wondering: Why would Stompernet want the rest of the world to take advantage of information at an event that only members and their guests can attend?

—It creates interest in their membership site. I guarantee that if you search for all the “#Stompernet” tweets and read them, you will find at least three tips you can start using today to increse your bottom line. (Membership in Stompernet is closed but will reopen later this year. If you’re interested in joining, please email me and I’ll make sure I notify you when membership opens.)

—Many of the thousands and possibly millions of people on Twitter who are following all the Stompernet members who are tweeting about the great speakers and tips are “retweeting” the tips to THEIR followers, and so on, thereby exposing potentially millions more people to Stompernet.

—No more whining that “The Daily Tattler didn’t cover our event, boo-hoo.” By using hashtags, you turn your entire audience into journalists and let THEM report on the event for you. Often, their reach on Twitter will be far greater than the reach of many top-tier media outlets like CNN and the New York Times. Plus, those tweets are online forever, just waiting for the search engines to find them.

How do you use hashtags for publicity and promotion? Share your best tips.