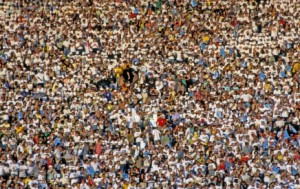 Do you hate Twitter and refuse to use it because “who cares what I had for lunch?”

Do you abhor Facebook and predict it will be passe by next year, so why go through all the trouble of creating a profile?

Does your boss prohibit people from using Facebook at work? And nix your budget requests for social media?

If so, read this quick explanation by Brian Clark of Copyblogger about why not participating in social media is a huge mistake and could be costing you dearly:

“Smart marketers participate in social media
because that’s where the people are.“

Here are some stats that should convince you and your boss, courtesy of Adam Singer’s Social Media, Web 2.0 and Internet Stats:

Many of those people have problems, ailments and dilemmas—and are looking for free advice. Others are willing to pay somebody to make things better.

I like Brian Clark’s solution for the boss: Stop debating the premise that social networking does or doesn’t work “and start fixing the problem.”