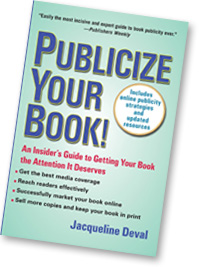 If you’re writing a book, here’s a tip that savvy authors already know.

When you’re trying to get onto a TV or radio show, never pitch your book. As soon as guest bookers realize you’re peddling a book, you’re toast.

Instead, pitch a relevant issue that’s tied to the book. Also, pitch an entire show so that if the producers like you’re idea, they don’t have to spend days finding suitable guests.

That’s the advice I offered in the new book Publicize Your Book! by Jacqueline Deval, publisher of Hearst Books and a director of publicity for several publishing houses. Here’s the example I gave her, which is on Page 119:

“If you wrote a book about how children of divorced parents suffer long-term effects well into adulthood, don’t try to entice television producers with the book. Entice them with an entire show around the topic of ‘Children of divorced parents: Do they ever recover?’ Then suggest two or three other guests who might also be interviewed in the same show, with at least one of them on the other side of the issue. Do that and you’ve just given the producer the guts for an entire show, and they’re more likely to bite because you’ve done their work for them.”

Her book also includes an entire chapter “Get on the Oprah Winfrey Show.”